A few days ago, Benfica president Luis Felipe Vieira was speaking of the friendly match which the Eagles’ B squad played against Liverpool.

The game was preparation for the Reds’ Champions League final against Tottenham Hotspur, and according to Vieira, Jurgen Klopp’s side became impressed with one specific player.

We knew it wouldn’t take long for the Portuguese press to find who it was, and today, O Jogo reports Liverpool’s interest in David Tavares.

The outlet writes the 20-year-old impressed the Reds due to his physical form and his aggressiveness when going into challenges. 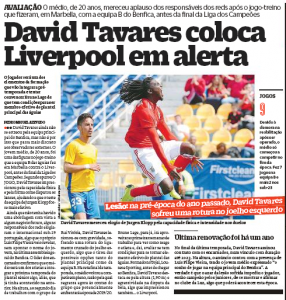 However, O Jogo makes it clear that no approaches have been made looking for a future deal. All that happened is that some Liverpool officials were impressed with the midfielder, although it could obviously become something else in the future.

Tavares was supposed to join Benfica’s first team squad this season, but had a knee injury and had to wait a little longer. Now that he’s proven to be ready to compete at the top level, he’s set to be part of the preseason list, and perhaps make his official debut for the club soon.