As Liverpool prepare to face Porto for the Champions League round-of-16 this month, it’s time to watch how the opponents are doing in knockout games.

As reported by newspaper O Jogo, officials from the Anfield side were present at Estádio do Dragão on Wednesday night, where they watched Porto’s 1-0 win over Sporting for the first leg of the League Cup semifinals.

What the emissaries saw was not much to fear, as the home side failed to have a spectacular performance and found a goal with an unusual hero, Tiquinho Soares, who’s been far from having great form this season. 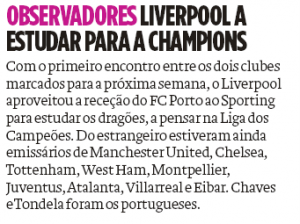 The local press praised three special players: right-back Ricardo Pereira, who keeps showing great physique and is a constant threat on his side of the pitch; midfielder Sérgio Oliveira, another one who’s not usually one of the highlights, and the match winner scorer Tiquinho Soares.

The players who normally make the difference for the club, such as Brahimi and Marega, both had a disappointing night.

Although Liverpool clearly had sporting interest in the match, other clubs were keeping an eye on potential targets as usual. West Ham, Manchester United, Chelsea, Tottenham Hotspur, Montpellier, Juventus, Atalanta, Villarreal and Eibar all had scouts at Estádio do Dragão as well.