Home Europe Liverpool have now refocused on signing attacker, will be big money, something...
SHARE

Last week L’Equipe had a feature on the future of Kylian Mbappe and the clubs interested in the AS Monaco star. It seemed that a few of the clubs mentioned may have a genuine interest and be set to make an effort, but the rest appeared to be making up numbers.

Liverpool were in there, despite L’Equipe pretty much ruling out Jurgen Klopp’s chances. They had been used to help build the drama.

Similar could be happening with Alexandre Lacazette. L’Equipe have a special on where the Lyon player will end up, and Liverpool are tagged on with AC Milan at the end.

L’Equipe say Liverpool have followed Lacazette for numerous seasons, and have recently focused on the possibility again. Klopp is said to want an attacker who can play on the right side. 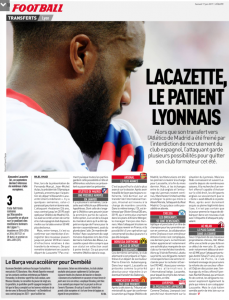 This is where Lacazette started his career, and L’Equipe say it’s ‘uncertain’ if the Frenchman would want to go backwards and become a versatile attacker again.

Let us answer that question… no, no he wouldn’t.

Then there’s the rather big matter of Sadio Mane. Yes, it’s pretty certain Liverpool are looking for a deputy to Mane, given how much they miss him when he’s out, but Lacazette isn’t that man.