Lazio are still working to secure Stefan De Vrij on a longer contract, report Tuttosport. The Dutch defender has been in renewal talks for several months and despite agreement being reported as imminent more than once, Lazio still haven’t got De Vrij to sign anything.

The longer things drag on the more worrying it is for the Rome club, with De Vrij’s contract expiring at the end of June. From January onwards De Vrij can speak to other clubs, but Tuttosport state they’ve been contacting him anyway.

Along with reported interest from Barcelona, the Turin newspaper say De Vrij has offers from Atletico Madrid and Liverpool. Juventus are also interested but are said to be in the ‘second row’ for a transfer. 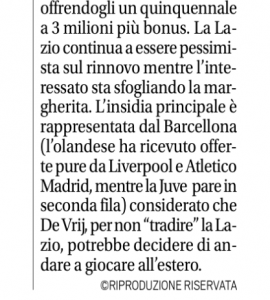 Any Liverpool offer would be a personal terms package, with the hope they could then sign the player for free next summer.

There’d also be the possibility of agreeing a cut price deal with Lazio as the January window grows older.

An advantage for Liverpool is that De Vrij could be more minded to a move outside of Serie A, say Tuttosport, so as not to betray Lazio.