Home Europe Liverpool ‘should not oppose sale’ and ‘good relations’ would help transfer over...
SHARE

After several claims over the weekend, Dejan Lovren to Lazio continues to be a theme in the Italian media on Monday.

Gazzetta della Sport echo claims made earlier, explaining the Liverpool player is an option which has appeared for Lazio very recently. Looking for someone with experience, the 30 year is seen as a reasonable choice.

There’s an assumption Liverpool won’t stand in the way of a transfer, given the defender’s contract only has another season to run after this one. Previous claims had put a Reds asking price at around €20m, and whilst Gazzetta aren’t as specific, they suggest the fee could be less than that.

With Lovren being in the contractual situation he is, Liverpool ‘should not oppose a sale’, as they’ll be reluctant to risk losing the player on a free transfer in summer 2021. 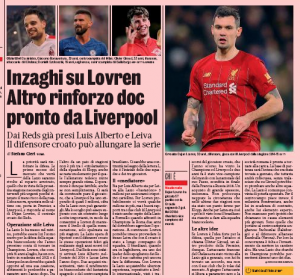 Gazzetta believe ‘good relations’ between the Premier League club and Lazio, built up over previous transfers, would help smooth the transfer through.

In addition, Lucas Leiva could be used to sweet-talk the Croatian into the move.