Liverpool aren’t getting extra money for the sale of Rafael Camacho to Sporting this summer, according to the Portuguese press.

Newspaper Record details today that the player hasn’t reached the individual goals which would trigger the bonuses agreed in his move to Lisbon.

Rafael Camacho was sold by the Reds in 2019 for a fee of €5m, and according to the outlet, about half of it has been paid by Sporting so far.

There was another €2m which would depend on performance bonuses. Record says that in this first year, the player would have to make over 30 appearances to trigger that, and even if he features in the nine games left, that wouldn’t be possible. 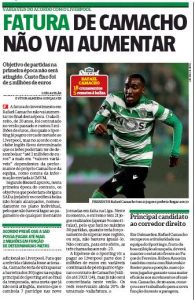 Record apparently didn’t get access to the details of how much Sporting have to pay for this specific bonus. But there are apparently other objectives to be reached next season.

Rafael Camacho has one goal and one assist in 21 appearances for Sporting so far.

Following his Liverpool exit, he signed a five-year contract with the Lions.