Liverpool are one of a number of clubs who tried to sign Kylian Mbappe before the youngster’s breakthrough with AS Monaco, report French newspaper L’Equipe. Mbappe was frustrated at the time, not being given the assurances he wanted over first team football, and a transfer looked a possibility.

Luckily for Monaco, they managed to convince Mbappe he would get his chance to breakthrough into their team quickly. Monaco were true to their word and if Jurgen Klopp wanted Mbappe now, Liverpool would possibly have to pay more than €100m.

At just 18 years of age, Mbappe has scored 19 goals so far this season, making him one 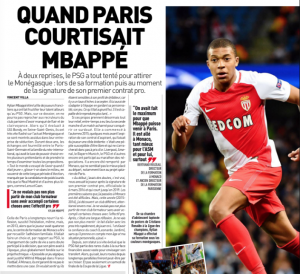 of the hottest properties in European football. Liverpool were said to be part of ‘mammoth’ negotiations which took place before Mbappe committed to Monaco.

Interest from Arsenal and Manchester City has been well known and reported, and Liverpool can now be added to the list of English clubs who have tried to sign the player.