Liverpool are in the race to sign Atletico Madrid defender Theo, according to claims in the Spanish media. The youngster is currently on loan with Alaves, and his performances have also caught the attention of Manchester City.

AS have reported Liverpool are the latest clubs to show an interest in Theo, along with Manchester City, Real Madrid and Marseille.

The 19-year-old is set to return to his parent club Atletico Madrid in the summer, but there are concerns over his chances getting games with the Spanish side due to first choice left back Filipe Luís. 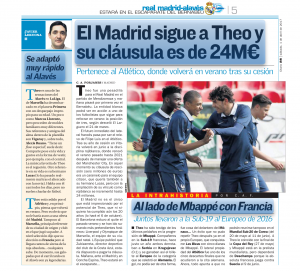 Despite only signing a contract last summer, following Manchester City’s attempts to sign the Frenchman, the likes of Liverpool could look to land the player in the next window.

Liverpool would be able to sign Theo for a transfer fee in the region of €24m, a little over £20m, a clause which was implemented into the new deal he signed last year.

His hometown team Marseille are one club who would be prepared to pay the termination clause, and it looks like there will be a scramble for the defender in the summer.

Theo Hernandez would be an impressive coup for Jurgen Klopp and Liverpool, but it wouldn’t be an easy transfer to pull off.