Liverpool are reportedly set to make another attempt to extend the contract of Rafael Camacho.

According to Portuguese newspaper Record today, the Reds have scheduled a meeting with the player’s entourage which will happen in the coming days.

The outlet says the talks have been ongoing, but the club and Camacho’s staff are still to find an agreement to extend the current deal, which expires in 2020.

It’s claimed that the new contract on the table would run until 2025. If Camacho doesn’t like it’s length, this should not be a problem, as it could include a clause which would guarantee a loan spell for one season. 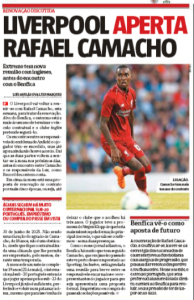 Record says Camacho thinks it’s time for him to evolve, and playing for Liverpool’s U23 isn’t good enough. So he’s either being promoted to the first team or leaving to play somewhere else.

Lisbon rivals Benfica and Sporting are both being said to be battling for the player, but they must wait for Liverpool to sort the situation first.