Portuguese newspaper A Bola is one of the many newspapers hyping up tomorrow night’s Copa Libertadores final. And today, they bring an interview with Palmeiras youngster Gabriel Menino.

The 20-year-old is obviously excited with the chance of winning a continental tournament at such a young age, and with a bright future ahead, he’s also spoken about his career plans.

Menino was asked about which European league would suit him best, and he had no problem naming all the clubs he thinks would be a good destination for him.

“They are all teams with very strong players, with a quick touch of the ball, they like to attack and defend in blocks.” 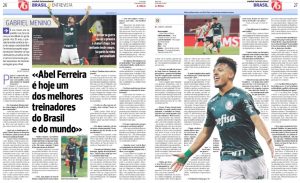 We often see South American players naming clubs who they dream of, and of course most of them are never able to reach Europe’s top sides.

Gabriel Menino, however, may have enough potential for Liverpool or Manchester City. Besides being a regular starter for Palmeiras at this age, he’s already been called by the national team twice. It’s rare to see manager Tite naming players who’re still in Brazil, let alone a 20-year-old, so that’s something special about him.

Despite being mainly a midfielder, Menino can also work at right-back, which is the position he was called up for at the national team.

He has a contract with Palmeiras until 2024, and a release clause of €60m.