Liverpool are interested in a move for Renato Sanches but could now face competition from Manchester United for his signature.

That’s according to Gazzetta Dello Sport, who say United have joined the growing list of admirers for the Portuguese midfielder.

Sanches has rediscovered his form since moving to the French side and has been heavily linked with a move away in January as they face growing financial difficulties.

Liverpool were named as suitors last week, with it claimed that they were eyeing him up as a replacement for Georginio Wijnaldum, who is entering the final six months of his contract in January and looking likely to leave.

That was backed up by reports in France that claimed a bid would be welcomed by Lille and a sale in January had not been ‘excluded’ as yet.

Gazzetta follow that up and again name Liverpool as suitors but say Manchester United are also taking a keen interest.

They report that Sanches is a potential target for Inter Milan, with Antonio Conte keen to add to his midfield as he considers himself short in that area.

Sanches is on the list, but the Italian newspaper say the player, who is represented by super-agent Jorge Mendes, he has ‘been approached’ by Liverpool about a possible transfer. 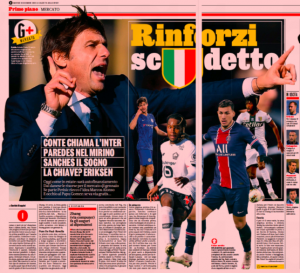 They add that ‘even Manchester United have made a survey’, something which has led Inter to do their own investigating and discovering he won’t cost more than €25m.

That is all the newspaper offers on the subject, but it seems both Premier League sides are lining things up if it becomes clear that Sanches is available, and at a knockdown price to boot.

Of course, this all could be agent games, with Mendes simply ramping up interest in his client and looking to take advantage of Lille’s precarious situation and secure a big-money move for him and his client.

Still, it seems the interest is there and this one to keep a close eye on as the January transfer window comes ever closer.