Sevilla defender Diego Carlos is of interest to Manchester City this summer, with Liverpool and Manchester United also ‘considering’ a move.

That’s according to Marca, who say that ‘intermediaries’ for the player are looking to place him in the English market in this transfer window.

His performances have earned him admiring glances from around Europe, particularly in the Premier League, with several sides all credited with an interest.

Manchester City have regularly been linked and a report yesterday indicated that there was ‘caution’ at Sevilla they could make a bid.

Numerous reports have also identified Liverpool as suitors, with it claimed back in April that Jürgen Klopp considered the player as the ‘perfect’ signing this summer.

Marca now add Manchester United to the mix, stating that alongside their Premier League rivals, they are ‘considering the possibility’ of having the centre back next season.

Sevilla, for their part, are open to a sale with them keen to raise cash to further bolster their squad following the arrival of Ivan Rakitic. As has always been the case at the club, they need to sell to balance the books for that to happen. 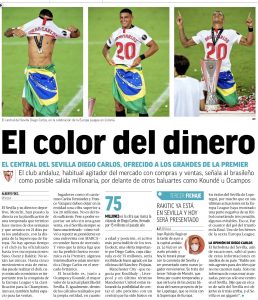 Carlos is considered one of the ‘most valuable’ players in the squad and so an ‘important offer’ would be ‘well-received’ should it arrive.

That is where the Premier League trio come into play.

It’s claimed that England’s top flight is one of the only ones not to have lost it’s ‘economic strength’ following the Coronavirus epidemic and so intermediaries are looking to place him there.

Carlos has a release clause of €75m, but it’s not clear whether any of the three mentioned sides would be willing to pay that, or even get near it.

It would be surprising if Liverpool were as it’s been well-established finances are tight at Anfield, but that’s not the case at either Manchester City or Manchester United.

Should they want to push for a deal, then Sevilla will be more than open to negotiations and this rumour could be one that picks up pace in the coming days and weeks.