Home Europe Liverpool man ‘could come back into vogue’ for transfer – Wages may...
SHARE

Roma have turned their attention to Liverpool forward Xherdan Shaqiri after seeing a deal fail for Inter Milan’s Matteo Politano.

The Serie A side had agreed on a deal with Roma that would have seen the clubs swap players, with Politano going to Roma and Leonardo Spinazzola going the other way.

However, that deal fell through at the last minute and, while it is not yet wholly dead, Roma are looking at alternatives.

Shaqiri is one of them, according to Gazzetta Dello Sport and Tuttosport, who both say that the Liverpool man is on their list.

Tuttosport say that his name ‘could come back into vogue’ with Roma having been interested in the Switzerland star before their interest in Politano.

They also say that the Italian side sent a loan proposal to Liverpool last week, but that was quickly rejected.

The Reds are not keen on letting Shaqiri go despite him managing just 174 minutes in the Premier League this season. 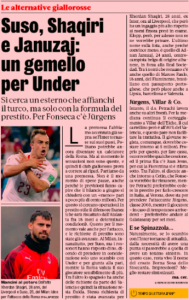 A further complication could also be Shaqiri’s wages, with Gazzetta adding that his ‘engagement’ is higher than the other names Roma are looking at.

Should they be unable to get a deal for Shaqiri done, the club are also looking at the likes of Adnan Januzaj and Fluminense youngster Marcos Paulo.