Earlier this week we covered reports from the Turkish press that Liverpool sent a scout to watch Trabzonspor goalkeeper Ugurcan Cakir in action against Fenerbahce last weekend.

Despite a good start from summer signing Adrian it was reported the Merseyside club are in the market for an understudy to Alisson Becker and it seems the Turkish goalkeeper is one of the options on their agenda.

Aksam today claim Liverpool are planning to make an offer for the player next summer and they will continue to monitor him until the end of the season. The 23 year old has been linked with a move to the Premier League side in the past few months. 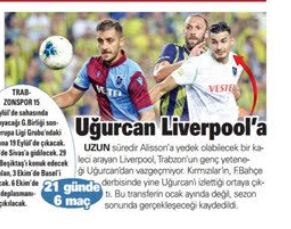 Initial reports from Turkey suggested Trabzonspor value their academy graduate in the region of €15m, and that’s what they’ll point do if an offer arrives from Liverpool.

Cakir looks set to start Turkey’s upcoming Euro 2020 qualifying games against Andorra and Moldova after initially being called up to the national squad earlier this year.