Marco Asensio started in 19 games in La Liga last season and had three starts to his name in the Champions League for Real Madrid.

He wasn’t starting regularly under Zinedine Zidane and will hope to have more prominence after the Frenchman stepped down as manager.

Julen Lopetegui was appointed as Zidane’s successor and a few of the players who did not play regularly last season could be targets for transfers, according to today’s edition of Mundo Deportivo. One of them is Asensio.

The Spain international had the backing of Zidane in principle, but that didn’t convert into more minutes on the pitch. He has been included in La Roja’s squad for the 2018 World Cup in Russia, which shows Lopetegui rates him.

Mundo Deportivo claims a major club has made a ‘formal offer’ to Real Madrid to sign Asensio this summer. The offer has come from Liverpool, who were their opponents in the Champions League final. 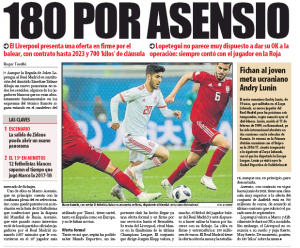 The Merseyside club are willing to break the bank to bring Asensio to Anfield, according to the claims. The transfer offer mentioned is “firm” and astronomical – €180m. However, the 22-year-old has a €700m release clause in his contract, which runs until 2023.

Just to make this abundantly clear: Mundo Deportivo claim Liverpool have made a €180m offer for Marco Asensio.

The offer is ‘on the table’ at Real Madrid, and the Spanish club ‘will study it’.