Liverpool are once again showing an interest in Braga defender David Carmo, who is likely to leave the Portuguese club this summer.

That’s what O Jogo report today, stating that the Reds have reignited their interest in the centre-back after trying to sign him in 2021.

They explain that Braga are ‘very likely’ to sell Carmo this summer and he has already been ‘sounded out’ by several Premier League clubs, including Liverpool.

Scouts from several sides have already been to watch him in Porto’s clash with Rangers in the Europa League, but it is Liverpool who ‘follow closely’ courtesy of a ‘recommendation’ from Jurgen Klopp.

Indeed, the club have already been approached by several English sides, who want to understand the conditions of a possible deal.

Braga chief António Salvador isn’t interested in a sale, though, and has told those interested parties that they will have to activate Carmo’s €40m release clause.

Whether anyone, including Liverpool, would match that remains to be seen, but the strategy of the Portuguese side is to focus on clubs who have ‘superior financial conditions’ and thus make as much as they possibly can from a sale. 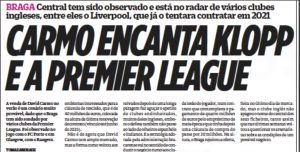 Liverpool’s admiration of the player goes back to last season when they tried to sign Carmo in the January transfer window.

They had offered to sign the defender on loan until the end of the season for a figure of €4m and include a purchase clause for €20m, but the deal was rejected by Braga and then scuppered by Carmo suffering an injury.

They did not, however, ‘erase the name’ of the centre-back and are now keen again, going as far as to question Braga about a potential deal in the summer.