It appears that Liverpool, fresh from losing the Premier League to Manchester City and the Champions League to Real Madrid, are intent on bolstering their attack.

The potential loss of Sadio Mané to Bayern Munich is probably on their minds as well, which is why they are going all out for Darwin Nuñez.

At least, that’s what Record are reporting, claiming the Reds are ‘determined’ to sign the Uruguayan and have offered €100m to try and secure a transfer that would become their record signing and the second biggest sale in the Portuguese league.

The newspaper state the player ‘has already informed Benfica that he wants to play in the team led by Jürgen Klopp’ following the Champions League clash between the two sides, when he was reportedly ‘fascinated by the atmosphere at Anfield’, as well as ‘being impressed with the way which the players interact at the club’.

As things stand, ‘the business model is still being refined, namely the amount of the variables reachable through objectives in the €100m total’. 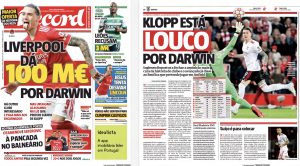 Still, Liverpool ‘intend to close the deal quickly to compensate for Mané departure’, but also because ‘they know they are not alone in the race’ for the striker.

It’s said the competition could offer more, but Nuñez ‘has already communicated his decision’ to Benfica, which is to move to  Merseyside.

He ‘intends to work with Jürgen Klopp and Virgil Van Dijk’, who so happen to be two people who have praised him of late.

Either way, Liverpool are making their move, and they’re doing it now.