Nuno Mendes is close to renewing his contract with Sporting, as the Lisbon club look to protect the 18-year-old’s value ahead of a transfer.

Record and O Jogo both report Liverpool have an interest in the player, and the latter has the most on Jurgen Klopp’s side. They state the Reds made an ‘offer’ worth around €22m for the fullback, which was rejected by Sporting who would have accepted €45m.

Once the renewal is confirmed, Mendes’ buyout clause will increase to €70m, putting Sporting in a strong position when it comes to negotiating a sale, potentially as early as the next summer transfer window.

Liverpool interest is presented as serious, despite the club not really needing a left-back right now. Mendes is so highly rated that interest from the world’s biggest clubs is taken for granted, and there’s also the possibility of him evolving into a central defender. 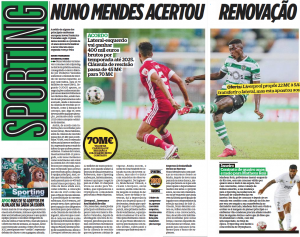 Klopp’s club made a ‘concrete approach’, and it’s thought their interest continues ahead of the player potentially moving in summer 2021.

Sporting are aware of interest, which extends to clubs including Real Madrid and both the Manchester sides. It would appear, though, that Liverpool have made the most effort.