Home Europe Liverpool lined up for huge transfer tussle with Bayern, offer has been...
SHARE

It’s explained the German club are very keen on Gelson and considering a quick move for the player. Also named as seriously interested in the Sporting star are Liverpool and Juventus, lining up a battle between three of Europe’s biggest clubs.

Liverpool have been linked with the player repeatedly since the summer, and the most recent claims said an offer has been expected from the Anfield club. Recently sending officials to watch Gelson in action for Sporting against Benfica, Liverpool were impressed and saw the 22 year old score a goal in the 1-1 draw.

O Jogo insist Sporting don’t want to sell the winger and will reject approaches for him. Gelson has a €60m release clause which given some recent transfers doesn’t sound as ridiculous as it once did.

However, even if Liverpool or another side offer that amount, Sporting have a further clause which means they can pay the player €1.5m, reject the €60m, and up his clause to €100m.

Liverpool interest is curious given Mohamed Salah signed for the club in the summer and has gone on to become one of Jurgen Klopp’s most important players. Gelson primarily plays on the right, and whilst both players can operate elsewhere, it seems an odd transfer for Liverpool. 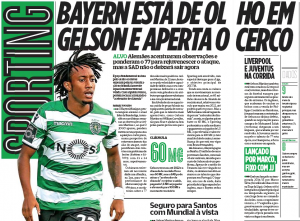