RB Leipzig defender Ibrahima Konaté will not be joining Liverpool this summer, despite reports in England about a move.

That’s according to SportBILD, who say Leipzig chief Oliver Mintzlaff has been told by Liverpool that the defender is ‘not an issue’ for them.

The Reds are likely to be on the hunt for a new centre-back this summer, with Jürgen Klopp’s side in desperate need of a long-term partner for Virgil van Dijk once he returns from injury.

They have been linked to several around Europe, but Konaté recently raced to the top of the list when reports in England stated they were close to a deal.

Indeed, it was even claimed that the Frenchman had undergone a medical ahead of the potential move.

That is something they have disagreed with somewhat in Germany, where it was claimed that Liverpool had not even made a ‘concrete offer’ for the defender. 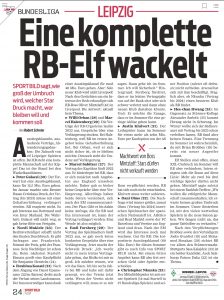 They follow that up today and say that after the loss of Dayot Upamecano, a move for Konaté is also ‘imminent’ as he can leave for €40m.

However, they insist ‘his new club will not be Liverpool’, explaining that following the rumours in England, Mintzlaff called his Anfield counterparts to ask if there was anything in it.

He was reportedly told that the defender is ‘currently not an issue’ for the club. In other words, they are not thinking about a move presently.

Of course, that could change in the coming months, but it seems, for now, Konaté is not at the top of Liverpool’s list.