In May, Marca strongly linked Chelsea with a move for Sevilla goalkeeper Sergio Rico.

The Spanish newspaper went as far as saying Chelsea had made advances on the signing and had ‘no problem’ paying the player’s buyout clause of €30m.

It looked extravagant for a second choice goalkeeper, unless there are genuine doubts about the future of Thibaut Courtois. Chelsea links quickly went away, and now they’ve been replaced by Liverpool links.

On Friday, AS say several Premier League clubs are interested in signing the player, including Jurgen Klopp’s Liverpool. Again, it sounds like a punt.

Liverpool haven’t got the highest quality goalkeeper solution, but it’s arguable that Rico wouldn’t change that too much. 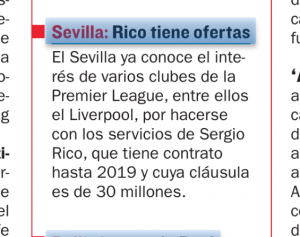 He’s a good goalkeeper but he’s not so obviously out ahead of what the club already have in Simon Mignolet and Loris Karius.

Perhaps Liverpool, like Chelsea, have just been plucked from thin air as the Spanish press try to find a club willing to pay Sevilla €30m for Sergio Rico.