Following his good performance against them in the Champions League this week, Houssem Aouar is being strongly linked with a move to Manchester City.

However, Friday’s edition of L’Equipe makes it clear that Pep Guardiola won’t have all his own way should he wish to make a move for the Lyon midfielder.

Liverpool, Chelsea and Arsenal are also presented as keen, but it’s the Reds who have their interest treated rather more seriously.

The French newspaper explains Liverpool have a ‘true history’ with the player, and their genuine interest goes back some way.

Before he signed his first professional contract in the summer of 2016, the Merseyside club had tried to snatch him. Lyon president Jean-Michel Aulas talked the player’s family around, and a good relationship was formed. 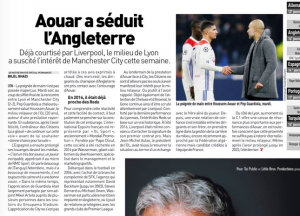 In November 2017, Aouar was asked why he’d turned down Liverpool: “Since I was a kid, I wanted to play for Lyon. Even if there were approaches, my childhood dream came before everything. I was born in Lyon, that’s where I grew up, saw my elders succeed. I play for the club of my heart, so I’m in my dream.”

Liverpool would have to convince the 20 year old that he’s had enough of that dream and should go off on a new adventure. They’d also have to deal with Aulas which may be tricky after the Nabil Fekir drama earlier this year.

Chelsea ‘cannot backtrack’ out of transfer agreement – Ball ‘exclusively in...