No matter how long goes by between stories regarding the future of Emerson Palmieri, Liverpool are always mentioned, almost as if they’re the only ones really interested.

Juventus have also been linked of late, but AS Roma’s reluctance to sell to a rival, and with more money in the Premier League, means they aren’t really an option.

According to Gazzetta dello Sport, the Reds, who are currently known to have a decent amount of money in their bank account, what with the Coutinho sale and all, are ‘in pole’ to sign the Brazilian. 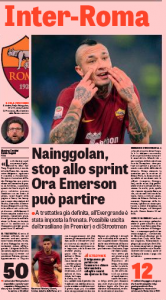 Barely used by the Italian side this season because of injury, the 23-year-old is still seen as a high potential player, which is why there is a fixed price of €25m to get him.

With the price for an Emerson exit pre-agreed, it makes things a little easier.

Although Liverpool have seen an improvement in their left-back position this season with Alberto Moreno not being rubbish and Andy Robertson showing signs he could end up being a starting player for the role, perhaps Klopp still isn’t fully convinced he has enough strength there.

Regardless, this Emerson to Liverpool story just isn’t going away, and, as the saying goes, there’s never smoke without fire.