Franck Kessié has a contract expiring in 2022 and his demands to sign a new deal are not being met by AC Milan. Paolo Scaroni, the chairman of the Serie A, side had earlier hinted they will not offer wages requested by the midfielder.

Last week, we relayed news from Italy that Liverpool are in contention to sign the 25-year-old.

Mundo Deportivo on Tuesday explain the Ivory Coast international is ‘followed’ and ‘wanted’ by several clubs, including the Reds.

Barcelona are looking for a midfielder, who is technical and physical. Kessié fits the profile. Although he is not deemed as a ‘top’ player, the La Liga side have him on their radar since he could potentially be available on a free transfer next summer.

The Rossoneri man is aware there are several ‘important clubs’ following him, like Liverpool, Atlético Madrid and Paris Saint-Germain, and they are ‘tempting his representative’. However, he is in ‘no hurry’ to decide his next destination.

Stefano Pioli’s side are coming to terms with the reality the player may no longer be at the San Siro next season and have already started looking for his successor. 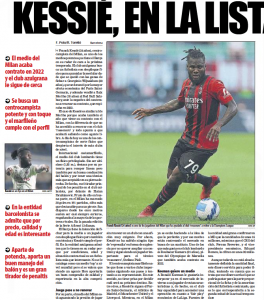 Over at Milan News, they say Kessié is demanding €7m plus €1.5m in bonuses to sign a new deal, but Milan are not in favour of meeting it.

It’s said ‘important offers’ have arrived from abroad for Kessié and his agent, but there is no mention of any clubs.

With Liverpool in the picture, we need to wait for more reports, to see if the Merseyside club have made any offer for Kessié.