Liverpool are showing an interest in Porto midfielder Vitinha this summer, and he would be more than keen on the move to England.

That’s according to Record, who say the 22-year-old could be primed for a big move to the Premier League.

The newspaper explains that the midfielder has ‘long been on the lips’ of the world, and in light of the starring role he’s been enjoying in the Liga Portugal, the big clubs are lining up.

Bayern Munich were brought into the picture by reports in Germany this week, and there are Premier League clubs ‘continuing to monitor him’.

Liverpool are one of them, with it stated that the player is being ‘coveted’ by the Reds ahead of the summer transfer window.

He’s valued at around €40m and has enjoyed a rapid rise in his value this season, and that is a figure that is ‘within reach’ for most clubs in the Premier League. 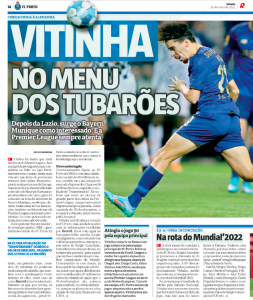 The player, for his part, ‘has his heart and soul’ in Porto but was ‘left with his mouth watering’ by the prospect of a return to the Premier League after spending last season on loan with Wolves.

That was not a successful spell for the youngster, but it has not put him off, and instead, he’s returned to Porto this year to prove himself under Sérgio Conceição.

Wolves had a €20m clause in his contract, but it ‘will be difficult’ for Porto to sell him for that price after his performances this season.

His price is likely to be above that, so Liverpool will have to shell out if they want to turn their interest into something more firm in future.