Portuguese newspaper A Bola today features a big piece on Otávio, who made 49 appearances for Porto this season and was of huge importance to the club in their title campaign.

So with the midfielder standing out for the Dragons, it’s inevitable to talk about his potential departure to a more attractive league this summer. And Liverpool, who’ve been linked many times in the past year, are named once again as potential contenders.

With A Bola claiming Otávio has a market in England, the Reds are named among the clubs who’ve been sending scouts to watch him shine at Porto.

Liverpool are put along with Manchester United and Newcastle United who have more economical power than the Dragons and have the player ‘referenced’ for next season, as his characteristics please all those clubs. 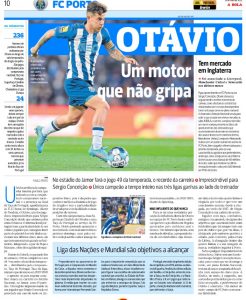 Liverpool’s chase for Otávio was strongly reported last summer, when it was even claimed the Reds placed an offer for his move.

It turned out that Jurgen Klopp ended up signing another player from Porto, as it was Luis Diaz who joined the Reds in January.

Now with the clubs having even more communication, Otávio seems to remain a target, currently protected by a release clause worth €60m.