Thiago Alcântara has been linked with a move to Liverpool ever since he decided against signing an extension at Bayern Munich.

This week’s edition of SportBild provides a background on the contract negotiations, with Thiago’s current deal expiring in 2021, and also the Reds’ stance on the midfielder.

It’s claimed the Bavarian club initially offered a three-year deal with an option to further extend it by a year, but the Spaniard persistently pushed for a four-year contract.

‘Out of goodwill’, the Bundesliga winners met the player’s demands.

After consulting with his family, the 29-year-old decided against committing his long-term future to the club. This caused an irritation within the club and therefore, Bayern have made a clear decision to sell him this summer.

Liverpool have been linked with the player, but SportBild say they have not received any offer from the Merseyside club.

According to the report, Jürgen Klopp’s side are ready to play transfer ‘poker’ to get a cheaper deal, and they are thinking of submitting a €20m bid for Thiago. Bayern ‘expect at least double’, meaning they value the player at around €40m or more.

The difference between what Liverpool are thinking of offering and what Bayern want is huge, which is why the transfer ‘poker’ with regards to Thiago ‘shouldn’t be easy’. 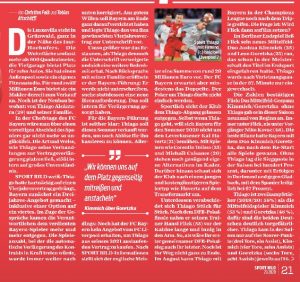 Hans-Dieter Flick’s side are of the belief they don’t need to bring in a replacement for the Spain international this summer, which is why they are ‘calm from the sporting point of view’.

There’s still time for the English champions to convince Bayern to lower their demands, and it’s worth keeping an eye on how this case develops in the coming weeks.