Three days ago, we carried a report from TuttoMercatoWeb, who explained Juventus face competition from Liverpool to sign Dušan Vlahović.

The striker has been attracting interest from various clubs ever since Fiorentina confirmed he has decided against extending his contract with them.

Sky Deutschland now state the 21-year-old’s suitor list is growing as Bayern Munich and Borussia Dortmund have emerged as contenders from Germany.

The Bundesliga duo’s interest in the Serie A star has been detailed by Sky transfer expert Marc Behrenbeck.

According to him, the Bavarian club have been in contact with the Serbia international’s camp sine approaching them last year. Dortmund, meanwhile, will consider signing the player if Erling Haaland were to leave the club next summer.

Apart from the two German sides, Sky states other clubs have ‘expressed interest’ in the goalscoring frontman. This is when the Reds are tagged as the report explains Liverpool,  Juventus and Atlético Madrid ‘have an eye’ on Vlahović.

Bayern and Liverpool’s interest in the Serbian is backed by today’s edition of Tuttosport.

The Fiorentina star ‘intrigues top clubs’ due to his goalscoring record and situation with his current employer. It’s said the player and La Viola parting ways ‘between January and June’ will ‘suit’ everyone since the latter don’t risk losing him for nothing in 2023.

When discussing suitors, Tuttosport explain Jürgen Klopp’s side are in the mix to sign the Serbian. Those close to the frontman suggest Juve are in ‘pole position’ to take Vlahović in the summer. 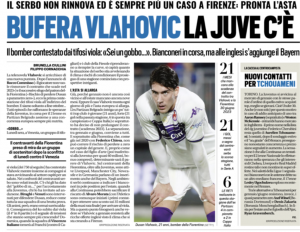 However, with Liverpool among the English clubs in the picture to sign Vlahović, it will be ‘necessary to see’ whether he can ‘resist rich British offers’ in January, given his current situation at Fiorentina.