Liverpool owner John Henry has offered Coutinho a contract extension, and the club are said to be ‘desperate’ to get a renewal signed, according to Mundo Deportivo.

It’s a new slant for the Catalan newspaper, who say Liverpool still want to keep Coutinho, despite everything that has happened and the player’s desire to leave, but they know it’s going be near enough impossible to keep him against his will.

Therefore, Henry is said to have offered improved terms to Coutinho in a charm offensive which included giving the Brazilian the armband recently, and a taste of being Liverpool captain.

According to Mundo Deportivo, Coutinho thanked Liverpool for their ‘interest and 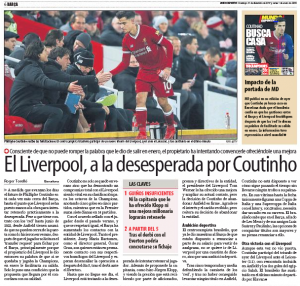 affection’ but reiterated his desire to join Barcelona.

It’s reiterated that Coutinho has agreed to take a hit financially by joining Barcelona, although, once again, there’s no actual details about that.