It’s fair to say it’s been a lousy week for Liverpool, with the injury to Joe Gomez adding to their injury worries.

The centre back’s injury in England training is disastrous for the Reds, who as you’ll be aware are already without Virgil van Dijk for the rest of the campaign.

The Premier League champions will be nervously watching the rest of this international break and praying nobody else picks up an injury or tests positive for Coronavirus.

In terms of the latter, they will be keeping a close eye on Georginio Wijnaldum and the Netherlands, with Krasnodar midfielder Tonny Vilhena testing positive earlier this week.

De Telegraaf report on that today and there’s an increasing fear that more players are going to come back positive as a result.

They explain that the Dutch have spent two days ‘sweating’ after deciding to make the whole squad take precautionary tests on Thursday and Friday.

Those samples are being checked in Belgium and until the results are known, team doctor Edwin Goedhart ‘will not feel at ease’.

He and his team are said to be followed with ‘suspicion’ by clubs who who ‘spare no effort’ to protect their players from Covid-19. Liverpool, for example, sent Wijnaldum in a private jet to minimise his contact with others. 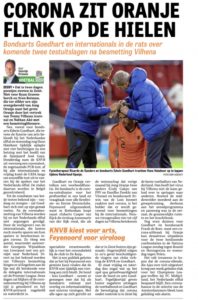 Immediately after Vilhena’s infection became known, they were ‘on the line’ to find out what this meant for the delegation of players from the Premier League.

They’re now nervously awaiting the results and hoping Wijnaldum is negative, while the Dutch team wait to see if their protocols are ‘watertight’.

The worry is, though, that Vilhena took part in group training, took part in the evening programme and was present in the dining room, common room and weight room before his positive test.

If it has spread it will lead to some serious questions from the like of Liverpool, who, after losing Gomez, could really do without Wijnaldum spending two weeks in isolation as well.

“They just wanted to have the player” – Midfielder reveals why...