Valencia are currently on the lookout for a new striker in case Simone Zaza leaves this summer after a good season with the La Liga side, and the options are numerous.

They wouldn’t be able to afford one outright, since they’re already spending a decent amount on Kevin Gameiro from Atlético Madrid, so it would have to be a loan, and among their targets is Liverpool’s Divock Origi, according to Super Deporte.

The Belgian striker, who didn’t make Roberto Martinez’s squad for the World Cup in Russia after a poor loan at Wolfsburg, doesn’t appear to be in Jürgen Klopp’s plans for the upcoming season, and reports in England suggested a £27m price tag has been slapped on his back.

As Valencia would not be able to pay that, they would be looking at a loan, and the La Liga side are said to have already made first contact with the striker, as their technical director, Pablo Longoria, apparently met with Origi a few weeks ago. 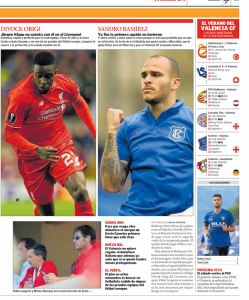 From the article, it appears Michy Batshuayi would be Marcelino’s first choice, but should that fail to materialise, his fellow countryman is one of the backup options, alongside Everton’s Sandro and Milan’s André Silva.