Way down the pecking order at Liverpool, which was all but confirmed following Daniel Sturridge’s cameo against West Ham, Divock Origi is once again going to have to find himself a new club.

Whether that is permanently or simply temporarily remains to be seen, but his agents are working hard to find him an exit avenue, offering him around Europe.

One of the clubs targeted, according to Gazzetta dello Sport, was Sampdoria, who were presented with the opportunity to sign the Belgian striker.

What happened after that isn’t entirely clear, but the Italian newspaper believe Origi’s future will be at Borussia Dortmund instead, who are yet to replace Michy Batshuayi following his second half of the season loan from Chelsea. 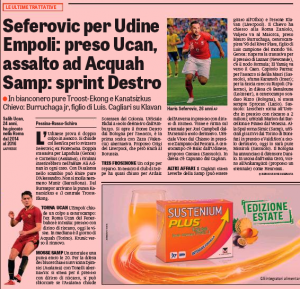 If presented with the choice between the two, it would be understandable if the Liverpool man chose the Bundesliga club, having already played in Germany last season with Wolfsburg, even if that wasn’t the most successful of spells he’s had throughout his career, scoring just six goals in 31 appearances.

Furthermore, Dortmund are also already qualified for the Champions League group stages, a competition Sampdoria will not be taking part in.