Catalan newspaper Sport have a big Philippe Coutinho article on Sunday, and whilst that’s no surprise… this one has a twist.

Rather than just being about Barcelona, Sport explain the Liverpool star is in the middle of a transfer ‘war’ between the La Liga side and Liverpool.

Neymar has made repeated attempts to talk his friend Coutinho into a Paris move, and Dani Alves has also been in contact, with PSG ready to match or even beat what Barcelona are prepared to pay.

However, and this seems the entire point of Sport’s exercise, Coutinho has his eyes and heart firmly fixed on Barcelona. Neymar can do what he likes, and has tried, but Coutinho’s dream is Barcelona, and he’s not ready to drop that for PSG. 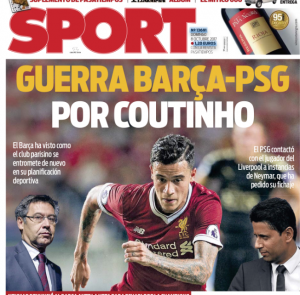 Having fluffed those feathers, Sport reiterate there’s already been a transfer meeting with FSG looking towards the next window, and that’s crucial to show just what Coutinho’s intentions are.

The Brazilian’s camp are in repeated contact with Barcelona, and have made it clear to Liverpool that the player wants to follow the Catalan dream.

Barcelona may win the war over PSG, but they’ve also got to defeat Liverpool on this one.