Tuesday’s copy of L’Equipe is a transfer special, and the French newspaper’s words will likely repeat around the rumour mill for the next month or so.

All the likely candidates are included, and it’s English clubs who are at the forefront.

With a section on Benjamin Mendy, L’Equipe claim there’s serious, mainly Premier League, interest in the player. Liverpool are one of a number of clubs said to ‘have expressed their interest very concretely’.

That likely means they’ve contacted the player’s entourage and made it clear they’d like a summer transfer and are willing to pay big bucks to get it. 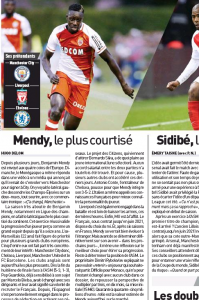 Jurgen Klopp and Liverpool would be up against strong competition, as well as Mendy considering a stay at Monaco.

The 22 year old is primarily a left back but has played further forward on occasion, his contract runs until June 2021.

Liverpool have ‘engaged in the battle’, report L’Equipe, and aren’t simply going to ‘drop their weapons’ and run away in the face of strong competition.