Turkish newspaper Fanatik have exclusively reported that Everton and Liverpool are both interested in signing Trabzonspor goalkeeper Ugurcan Cakir.

It’s reported Liverpool have been following the player’s progress since last year, but their €20m bid in the winter transfer window was quickly rebuffed by club president Ahmet Agaoglu, who decided to keep the player at least until the end of the season.

However, Fanatik report Liverpool remain interested in signing the 24 year old, and could knock on Trabzonspor’s door with a bid.

Everton are also said to be aware of the player and the Turkish newspaper claims Cakir is on Carlo Ancelotti’s wish list for the summer transfer window. T

he Italian manager is reportedly a ‘big fan’.

Fanatik say along with the two Merseyside clubs, Benfica, Sevilla, Atalanta and Lyon are also following the player but it seems his next destination will be the Premier League. 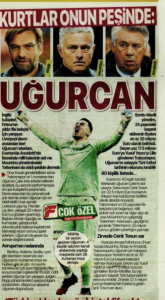 Trabzonspor reportedly value the player in the region of €30m, and if he leaves the club, Fanatik say Cakir will become the most expensive player ever to leave the Turkish Super Lig, overtaking Cenk Tosun’s record when he moved to Everton for €22.5m in 2018.

Cakir’s contract with Trabzonspor will expire at the end of June 2024.