Home Europe Liverpool don’t want to lose ‘diamond’, Reds will try to get him...
SHARE

Rafael Camacho only has a year left on his Liverpool contract after the current season.

A summer exit has been repeatedly talked up in Portugal, with the 19 year old being frustrated he hasn’t been getting the minutes he thought he would this season.

It’s been reported that Camacho had been assured of a meaningful role in Jurgen Klopp’s squad and has been annoyed that hasn’t been the case.

Clubs in Portugal, Germany and England have been linked with the Liverpool youngster, with Sporting probably being the topic of most claims. 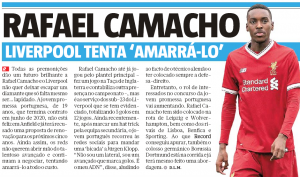 ‘diamond’ and will continue to try and get Camacho to sign a renewal. He’s been offered a five year deal at Anfield, but clearly hasn’t been impressed enough to sign it yet.

The Reds will continue their efforts, with Record saying they want a renewal ‘at all costs’.