Home Europe Liverpool determination to get star for Klopp, latest offer will be hugely...
SHARE

It seems that Liverpool’s interest in Gelson Martins may have stepped up after first contacts with Sporting.

A couple of weeks ago, Liverpool reportedly first showed their will to sign the player, and told the Portuguese side they could pay between €40m and €45m for him.

At the time, A Bola claimed that it wouldn’t be enough, since Sporting don’t want to sell Gelson for less than his €60m release clause. They even made strange claims that even the release clause amount could be rejected. 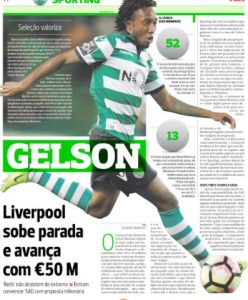 Now the newspaper is back with the story on Saturday, saying that Liverpool keep trying to convince the Lions, and have made it clear to Sporting they can offer €50m.

There’s still no response from the Lisbon club, and even though A Bola keeps saying that president Bruno de Carvalho will only sell for the release clause, they don’t rule out the possibility of a move for this offer.

If it’s correct that Liverpool have offered such a sum, it will be very difficult for Sporting to turn it down, whatever they may say to their local media.