Liverpool’s interest in Fiorentina striker Dusan Vlahovic is back to being highlighted by reports in the Italian media today.

There are two stories who report the Reds have been chasing the 21-year-old, one of which is from Tuttosport, who explain La Viola are working to keep him at the club.

It’s claimed the player’s renewal is a priority subject for the Serie A side, who will offer him a new contract as soon as their president arrives from the United States.

Liverpool are pointed out as one of the contenders to take him out of Florence, along with the likes of Manchester United and Real Madrid. 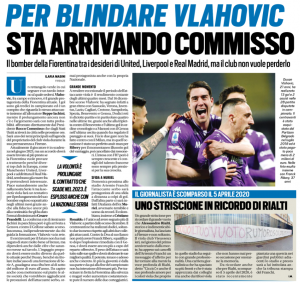 Fiorentina’s wish to give Vlahovic a contract extension is also featured by newspaper Corriere Dello Sport, and it’s no coincidence they also feature Liverpool’s interest in their story.

“Vlahovic already has ‘seduced’ the top clubs of international football – from Liverpool to Real Madrid – who are ready to compete for him with millions: Fiorentina must be good at defending him. Vlahovic has a contract until 2023, so there is no rush, it is true, but there is no risk of starting a new season without having obtained the necessary guarantees,” the outlet says.

The youngster has 13 goals scored by La Viola this season, and by the looks of it, it probably won’t be easy to sign him this summer, both due to competition and because of Fiorentina’s wish to keep him.