Home Premier League Liverpool Liverpool officials continue to check on potential signing – Could be a...
SHARE

The 24 year old has been in excellent form for his club this season, and this has resulted in talk of him leaving this summer.

Leicester City, Chelsea and Tottenham Hotspur were all linked with a move for the Turkish goalkeeper, but Milliyet claim Liverpool are the ones watching Cakir at the moment.

Jürgen Klopp is likely to strengthen his squad in the transfer window, and Cakir could be a good signing. Previous reports in the Turkish media suggested Liverpool are likely to send him out on loan for two years if they manage to land him, so his signing may well be an investment with the hope of profit at a later date. 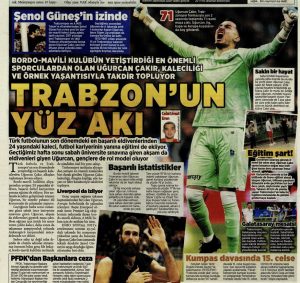 It’s reported Cakir is a perfect role model for Trabzonspor’s youngsters with his displays on and off the pitch and the interested parties are also aware of these qualities.

Cakir has made 28 appearances for his club in the Super Lig this season and kept four clean sheets. His contract with Trabzonspor will expire at the end of June 2024.

Chelsea have ‘advantage’ over other suitors to sign player – Blues...

Agent reveals how he arranged transfer to Southampton… Despite being in...

Manchester City ‘not far away’ from reaching agreement for signing –...