Thiago Alcântara continues to be linked with Liverpool and Manchester United, as the midfielder has entered into his final year of contract at Bayern Munich.

The 29-year-old recently insisted he’s not said he’s leaving the treble winners, but Uli Hoeneß, the Bavarian club’s honorary president, believes he may have an agreement in place with Liverpool and United.

Hoeneß said: “Supposedly he is in agreement with Liverpool and Manchester United. The clubs have not yet approached Bayern. It’s not style, they want to blackmail us.”

This week’s edition of SportBild states what Hoeneß said about the ex-Barcelona man was ‘correct’, and then goes on to provide further information on the Reds’ reported interest in the player.

The €30m fee demanded by Hansi Flick’s side is deemed ‘too high’ for Liverpool. Jürgen Klopp’s club have maintained this stance for weeks now, and the latest report indicates there has been no new development on this front so far.

With regards to United, SportBild makes it clear the Red Devils have not contacted the German champions. 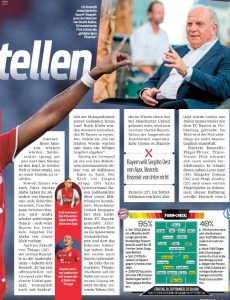 United, however, have ‘deposited their interest’ with the player’s camp, and his club are aware of this.

Bayern remain calm with the Spaniard’s situation and should he decide to leave the club, they view Corentin Tolisso as his natural successor. In other words, they don’t have to enter the market to sign a replacement for Thiago.