Once again, Philippe Coutinho graces the front cover of Mundo Deportivo. The Brazilian is picked out as the big story for the Catalan newspaper’s Monday edition, and it’s mainly built on Jurgen Klopp’s words after Liverpool’s defeat to Tottenham.

Klopp hasn’t specifically said anything which would indicate Coutinho is joining Barcelona in the January transfer window, but Mundo Deportivo believe it’s what the Liverpool manager hasn’t said which is a big hint.

During the summer, Klopp was completely against a transfer publicly, something which only served to irritate the Catalan press and offend their arrogance, but that he’s now not ruling things out entirely has given some hope.

Mundo Deportivo quote Klopp as saying: “I have no idea. We’ll see. We don’t talk about things like this. Can you imagine what it would be like if I said ‘yes, we have an agreement to let him out’? Right now, the one hundred percent truth is that nobody thinks about this. We do not talk about it, why should we?”

Whilst that will be translated from English to Spanish and back to English again, the general gist of Klopp not ruling out a sale entirely, and leaving room for a little doubt, has 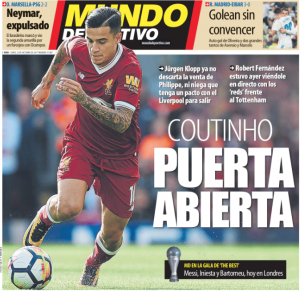 Mundo Deportivo say this week will see some movement from Barcelona to ‘relaunch the operation’ to sign Coutinho’, and they state Liverpool have a ‘commitment’ with the player to let him go.

The figures of €80m fixed fee and a further €30m in variables are now being mentioned repeatedly, with a growing Catalan confidence, whether misplaced or not, that Coutinho can be signed for around that amount.