Liverpool have been chasing Dani Olmo for some months, report Marca in their Friday edition.

It’s claimed the Dinamo Zagreb player has been repeatedly scouted by the Reds and they’re subsequently keen on his signing this summer.

Joining them are Borussia Dortmund, with both clubs said to believe the 21 year old fits their style perfectly.

Marca say the Croatian club were set against a sale before the European U21 championship because they were well aware their player would likely shine. He managed to do so, helping Spain win the tournament, and a potential deal is valued at around €25-30m.

It’s worth noting Olmo is right now the subject of endless rumours. Croatian claims this week were twisted to say Manchester United have offered €40m, which isn’t what was 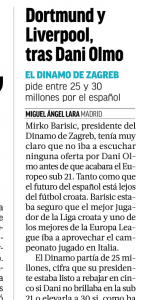 claimed at the start.

Now there’s further claims of Tottenham being close to an agreement, yet Spurs fans will know how many times that’s been reported about their club and youngsters shining in Croatia.

Liverpool interest makes some sense, but getting into a manufactured bidding war doesn’t.