Liverpool could have the opportunity to sign Torino star Gleison Bremer for as little as €25m this summer.

That’s according to Tuttosport, who say the Italian club may be forced to offload their rising star on the cheap in the summer transfer window.

Bremer has established himself as on of the best centre-backs in Europe over the last 18 months with a series of impressive performances in the heart of Torino’s defence.

His list of suitors have been growing by the week, with all the big clubs in Europe aware of him and keen to make a move.

Liverpool have been linked for more than a year, with their interest first reported all the way back in December 2020.

There have been regular claims about their interest since then, even after they signed Ibrahima Konate from RB Leipzig, with the latest report stating they were more interested than everyone else and that Jurgen Klopp might even have an advantage over the competition.

Tuttosport now say Liverpool could be given the chance to get the Brazilian for €25m if they were to make a move.

The newspaper explains that Bremer signed a new deal recently that extended his contract by another year to 2024 on the proviso that the club would sell him.

He wants the Italians to be able to ‘better monetise his departure’, something which would have been difficult as his previous deal was expiring in 2023.

However, it’s proven to be something of an ‘own goal’ for Torino, who will have to sell the defender for €25m if the defender wants the move, despite the fact he is ‘worth at least twice as much’. 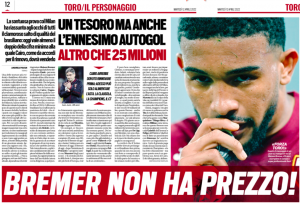 Indeed, the newspaper says he should be  ‘priceless’, referencing the fact that Juventus paid €85m for Mathijs de Ligt, and Bremer has been superior to him this season.

Liverpool, then, have the opportunity to get a long-term target for a very agreeable fee should they wish this summer.

They don’t particularly need a centre-back anymore now that Virgil van Dijk is fit, Joel Matip has been consistently available, and Ibrahima Konate has done well since his arrival too.

Bremer is a long-term target of theirs, though, and the opportunity to sign him for such a low fee might be one they’re tempted by.