Jasper Cillessen has been second choice goalkeeper since he joined Barcelona from Ajax in 2016. The La Liga winners’ former manager Luis Enrique and their current boss Ernesto Valverde preferred Marc-André Ter Stegen ahead of the Dutchman, as had always been the plan.

According to Sport, the goalkeeper “understands” that it is time for him to leave the Camp Nou and join a club that can help him get regular playing time.

Cillessen is attracting interest from the Premier League and Serie A. Liverpool, Chelsea, Arsenal and Napoli are all mentioned in Sport’s report. However, none of these clubs are ready to meet his asking price of €60 million.

Liverpool are by far the side who have been linked most with the player, and their need right now seems greatest, at least of the English clubs linked.

Barcelona “have proof”  there is an offer on the table for Cillessen and they are willing to negotiate to close the deal. They are aware it will be difficult for the potential suitors to pay their custodian’s release clause.

The Catalan newspaper claims the Spanish champions are willing to allow Cillessen leave, if they receive an offer of €30m. We’ve stated several times that Liverpool could likely do a deal for around that figure.

Chelsea are willing to allow Thibaut Courtois leave if they get AS Roma’s Alisson Becker. Arsenal have already signed Bernd Leno from Bayer Leverkusen. 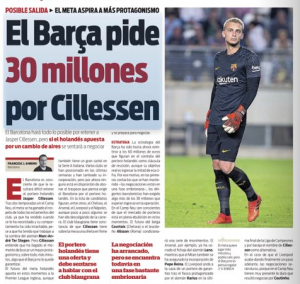 Due to this, Liverpool have an advantage over the other two Premier League clubs in their pursuit of signing the former Ajax man this summer.

One thing Barca know they need to prepare for is tough Liverpool talks, according to Sport.

The club have been left shaken by the Philippe Coutinho negotiations and expect a difficult time from Liverpool again.

But if Klopp is as interested as has been presented then €30m sounds a reasonable figure, maybe trying to get it down to €25m plus bonuses. This wouldn’t be a prolonged transfer war, Barca can calm down.