SportBild have spoken to Willy Sagnol, former Bayern Munich player and France international, about Kylian Mbappe and the future of the PSG star.

The most enthusiastic part of the interview with the German magazine was when Sagnol was asked about the striker and Liverpool, and that led the five-time Bundesliga winner to hype up a potential move to Anfield for Mbappe.

Sagnol explained: “This club has a big advantage: With Klopp you have a coach with whom every player in the world would like to work. Mbappe would have to adjust under him: he demands a lot of defensive work from his strikers, which Mbappe is not yet good at. But he can learn that, especially from a guy like Klopp. No question: Mbappe could become a king with Jurgen Klopp at Liverpool.”

Should Mbappe decide he’d like to leave PSG in the near future then it’s going to create something of a transfer battle. The Spanish media have long talked about an attempt from Real Madrid being set up for summer 2021, at which time the player will only have a year left on his PSG contract. 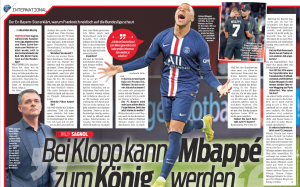 Liverpool have been linked on various occasions, yet it’s never felt like there was anything concrete in the scenario. Given what Mbappe would cost, it’s likely a major departure would be needed for Klopp to part-fund the purchase.

This summer would seem out of the question, however, given Mbappe’s contract situation, PSG will either have to secure a renewal or find themselves under pressure a year from now.