Barcelona’s hopes of signing Georginio Wijnaldum from Liverpool this summer are ‘in danger’ as Paris Saint Germain, and Inter Milan have already moved for him.

That’s according to Mundo Deportivo, who say the Liverpool man had ‘sounded strongly’ to reinforce the squad following Koeman’s arrival.

That’s in reference to last summer, when Barcelona chased the Dutch midfielder throughout the transfer window after Koeman was appointed as their manager.

At the time, it was reported that he believed Wijnaldum, who had shone for him during his time in charge of the Netherlands, would be the perfect addition to his squad.

That led to weeks of speculation about a potential move, particularly as the midfielder’s contract was expiring this summer, and he hasn’t signed a new deal.

Ultimately a move never happened, but he’s continued to be linked with a switch to the Nou Camp anyway, with many believing he would end up there this summer when his contract with Liverpool expires. 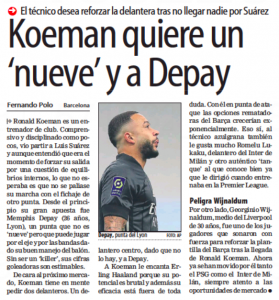 However, Mundo report the Catalan giants are ‘in danger’ of missing out on their man as PSG and Inter Milan ‘have already made moves’ to sign him.

The nature of those moves isn’t made clear; for example, it’s not stated whether they’ve offered him a contract or simply been in touch with his agent to show their interest.

Either way, it’s stated that they see Wijnaldum as a market opportunity and that his left his potential move to Barcelona in ‘danger’ of not happening.