Faouzi Ghoulam’s contract renewal talks with Napoli have been covered repeatedly over the past week or so in the Italian media.

On Friday, Gazzetta dello Sport stated that talks had stalled between the fullback and Napoli, with the main points of a new contract still not agreed upon. Manchester City have routinely been thrown in as the interested English club, to help up the drama of the situation.

With Ghoulam’s contract ending in June of next year, he’s a free transfer possibility, or even a cheap deal during the winter transfer window.

In a look at Napoli’s situation, and good season to date, L’Equipe say the club have been knocking back approaches for players, and one of those was from Liverpool for Ghoulam. 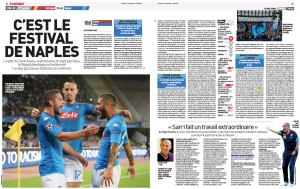 Liverpool interest in the player isn’t really being pushed strongly in Italy at the moment, but is perhaps on the verge of being. With Napoli travelling to Manchester for the Champions League, Ghoulam will find himself under a spotlight, which would help Liverpool claims grow.

Whilst the Manchester City links have felt forced, it remains to be seen if there’s anything concrete sounding in Liverpool interest.