Tottenham Hotspur have been credited with an interest in Franck Kessié just days before the summer window closed this week.

Spurs continued to be named as a suitor for the midfielder, whose future at AC Milan remains uncertain as he has less than a year left on his contract. Liverpool have emerged as a new candidate for the 24-year-old, according to reports.

The Ivory Coast international had earlier expressed his desire to commit his long-term future to the Serie A side, but that hasn’t happened so far.

Gazzetta dello Sport on Saturday explain Milan chiefs Paolo Maldini and Frederic Massara made an offer worth €6.5m per season, but the player said ‘no’ to their latest proposal.

He wants €8m net plus an additional €2m in bonuses, something that Paris Saint-Germain are willing to offer.

‘In these days of turmoil’, two Premier League clubs, Liverpool and Spurs, have ‘emerged’ as candidates for Kessié. That’s about the only information mentioned about the Reds and Tottenham. 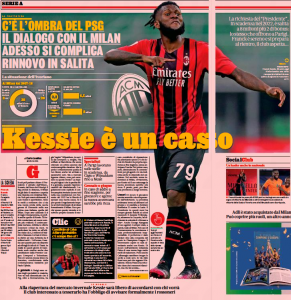 Gazzetta state the Italian club have ‘done their best’ and are ‘waiting for a response’ from the 24-year-old with ‘relative confidence’.

With PSG, Tottenham and Liverpool looming over his potential signing, a move away from the San Siro as a free agent next summer will leave him and his agent ‘richer’.