Home Europe Liverpool have already put £40m offer in, and the Reds won’t be...
SHARE

Liverpool have been one of the periphery clubs in the Bruno Fernandes saga.

Mentioned here and there for a few months. Then, at the weekend, Correio da Manha decided to drag the Reds fully in.

An offer was claimed of £40m, and whilst that isn’t close enough to Sporting’s valuation, if true it showed some intent from Anfield.

The claims then carried on, with it being suggested Rafael Camacho could be used in the deal. Sporting very much want to sign the youngster, yet yesterday there were claims he’s off to Schalke instead.

In Portugal they’re not agreeing with that, and there’s several reports saying Camacho is pushing to get a move to Lisbon, despite Schalke trying to finalise things.

The same newspaper which first claimed the Liverpool offer, now says the Champions 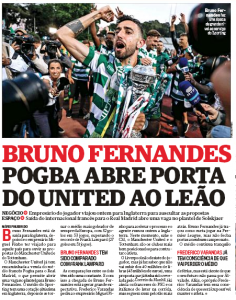 They don’t explain why, but when stating the Reds are behind Manchester United and Tottenham, the refusal to lift their bid is given.

There’s still time for things to change, especially if Camacho is being as insistent on his own Sporting move as is being claimed.