Thiago Alcântara’s time at Bayern Munich is expected to come to an end before the window closes.

The midfielder, who has a year left on his contract, has decided against signing an extension and is looking for a new challenge this summer.

Liverpool have been regularly linked with the 29-year-old and Germany’s Sport1 now bring what they present as the latest situation.

It’s claimed the Merseyside club are considered the ‘top interested’ party in the Spain international.

Sport1 have also learned from ‘club circles’, most likely from Bayern, that there should ‘already be an agreement’ between Jürgen Klopp’s side and the former Barcelona man.

The Reds still need to sort out an agreement with the Bundesliga winners, if they are to sign Thiago this summer.

Prior to the European tie, Munich based newspaper AZ interviewed Karl-Heinz Rummenigge, and the Bayern chief discussed Thiago’s decision to leave Allianz Arena.

“As for Thiago: there have been enough discussions between him and Hasan Salihamidzic. For a while it looked like he wanted to stay,” the Bayern CEO said.

“There were no longer any differences in terms of conditions. But at some point, he obviously thought that he would want to do something different at the end of his career. 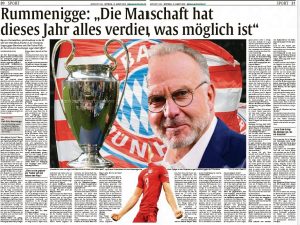 Whether Liverpool’s name is being used to flush out interest from elsewhere remains to be seen.

“It’s done” – Transfer to Chelsea presented as agreed, announcement will be on way

“It’s done” – Transfer to Chelsea presented as agreed, announcement will...